Erich Singer: LUCERNE FESTIVAL: The History of an International Success

Erich Singer's wide-ranging history of the Festival is finally available in English. Originally published in German in 2014 and richly illustrated, this is the first book to document Europe's most significant orchestral festival comprehensively, from its founding in the summer of 1938 to the present day. The German edition has become the standard work. For this shortened international edition, the author has revised and updated the material.

Erich Singer, who was born in 1943 in eastern Switzerland, was initially a conductor and orchestral musician in Basel and a music teacher in Lucerne. From 1980 to 1990, he served as the director of concert artists’ agencies and held a position in the LUCERNE FESTIVAL’s artistic and editorial department. From 1992 to 1995, he was head of the Festival's artistic office, later serving as head of music editorial (until 2006). Since then he has been a freelance editor. Singer has published many writings on music. 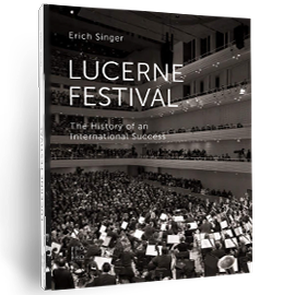