The first CD by Riccardo Chailly and the LUCERNE FESTIVAL ORCHESTRA is here – and it contains a world premiere recording. Last summer, Chailly and his elite ensemble gave the Swiss premiere of Igor Stravinsky’s Chant funèbre, a work that had been considered lost for more than a hundred years until it was rediscovered in 2015 (in a backroom at the St. Petersburg Conservatory). They paired this funeral music, which Stravinsky wrote for his deceased teacher Nikolai Rimsky-Korsakov, with three other early works, thus creating a portrait of the composer as a young man. The result was a prologue to the legendary Sacre, which was then given a thrilling performance in the concert’s second half. The live recording has now been released on CD. 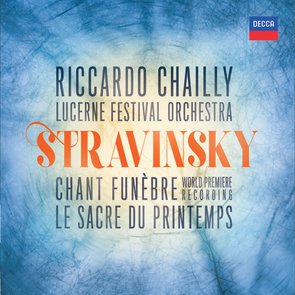