The much-anticipated book about the Festival: Erich Singer has written the first comprehensive history of what is today Europe’s most significant concert festival – from its founding in the summer of 1938 up to the present. Using substantial source material for his research, Singer sheds light on the highlights, crises, and key turning points of the Festival, right up to its current status. He addresses cultural-political contexts, considers the shifts in focus between regionalism and internationalism, and presents the perspectives of contemporary observers of the Festival and its performers. This richly illustrated book contains previously unpublished source material, including documents and photographs both of those who have shaped the Festival and of its influential artists. [available in German only]

Erich Singer, who was born in 1943 in eastern Switzerland, was initially a conductor and orchestral musician in Basel and a music teacher in Lucerne. From 1980 to 1990 he served as director of concert artists’ agencies and held a position in the LUCERNE FESTIVAL’s artistic and editorial department. From 1992 to 1995 he was head of its artistic office, later serving as head of music editorial (until 2006). Since then he has been a freelance editor. Singer has published many writings on music. 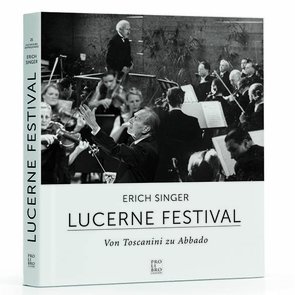