Book: «The Marvel of Lucerne»

«The Marvel of Lucerne» is the title of a new book (in German only), just in time to mark with the birthdays of the LUCERNE FESTIVAL ORCHESTRA and the LUCERNE FESTIVAL ACADEMY. This comprehensive and lavishly illustrated volume illuminates the success story from a great variety of perspectives and allows those who have been directly involved to have their say: above all Claudio Abbado and Pierre Boulez, who have given a detailed joint interview for the first time ever. The authors include such well known German-language cultural journalists as Peter Hagmann (Neue Zürcher Zeitung), Wolfgang Schreiber (Süddeutsche Zeitung), and Julia Spinola (Frankfurter Allgemeine Zeitung). And many of Abbado’s and Boulez’s companions – such as Daniel Barenboim, Alfred Brendel, and Maurizio Pollini – have contributed special birthday wishes of their own. 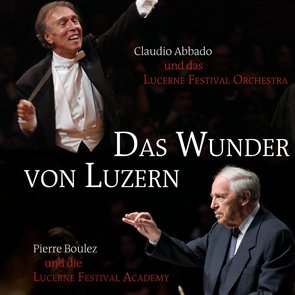