He did not thrust himself into the limelight but put himself, with economical, clear gestures, entirely at the service of the music: amongst the conductors of his time, Karl Böhm epitomised the anti-star. In the summer of 1964 he delighted the Lucerne audience with a compellingly flowing and cantabile reading of Bruckner’s Seventh – of course at the helm of “his” Vienna Philharmonic, with whom he was also to perform a buoyant Hindemith concerto six years later.

The 32-page booklet is in three languages and richly illustrated and contains a detailed portrait of the conductor by Uwe Schweikert.

The Historic Performances CD series presents live concert recordings of influential Festival artists. The sound quality of the original tapes has been painstakingly restored, and each release is accompanied by extensive documentation of its historical as well as artistic significance, together with photos and historical material from the Festival archives – a history of the Festival in sound. 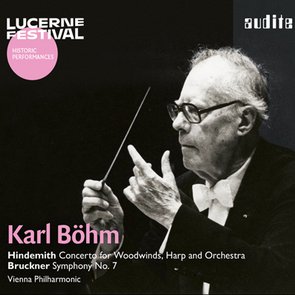