(Performances recorded in Lucerne on 26 August 1953)

Performances of enormous intensity: during Lucerne’s 1953 Summer Festival, Wilhelm Furtwängler conducted two of his all-time favorite works: Beethoven's Eroica and Schumann’s Fourth Symphony. This concert has now been edited for the first time using the original radio tapes. And now it is released for the first time complete, including the live recording of the Manfred Overture, which was previously thought to have been lost: a wonderful archival discovery.

Complemented by hitherto unpublished photos from the Festival archive, the accompanying 32-page booklet is in three languages and contains detailed information about Wilhelm Furtwängler, his relationship to the Festival in Lucerne, and his approach to performance. 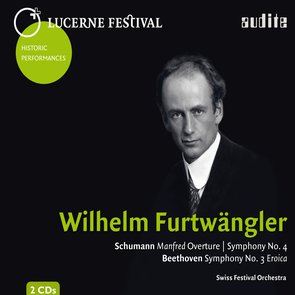