Whoever was there will not have forgotten this concert. And whoever was not there finally has an opportunity to see it on DVD. With a tempestuous Late Night program, Barbara Hannigan launched her “reign” as Lucerne’s “artiste étoile” for the Summer of 2014. Supported by the splendid Mahler Chamber Orchestra, the remarkable Canadian soprano demonstrated her sheer versatility. She sang concert arias by Mozart, performed simultaneously as the conductor (in works by Rossini and Fauré), and donned a costume of S&M fetish leather to play the part of the loopy chief of secret police from György Ligeti’s opera Le Grand Macabre, one of her signature pieces. Even Simon Rattle made a surprise appearance, though not as a conductor… 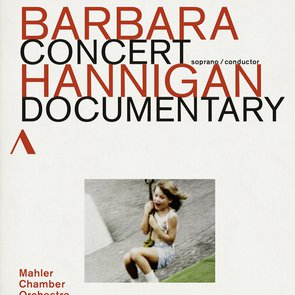